Getting to know Kris Kidd

When working a comicon, a vendor should never have time to pick up a phone and start searching the web for anything. A vendor is usually slammed with customers on the dealer room floor. Friday is usually a bit slower, with the exception of festivals such as A-Kon, or Comicpalooza, or Comic-Con International in San Diego.

We had time on our hands at this lovely festival that Kris put together.

Ok... on Saturday morning, they announced that the people who already had their badges from Friday would get in early, and the "rush" of patrons was coming "now". Here's a picture of that rush: 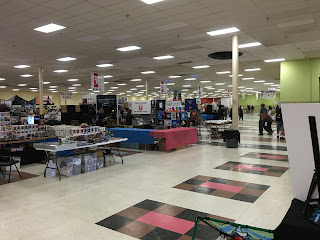 Now that you understand just how busy we were, you know why we had time to ask ourselves, "Who is this Kris Kidd guy, anyway?"

So we did a Google search...

The following information is available to the public, for a price. I’m not violating anything by putting it up on this website. It is “public record”. I’m just making some of it available for free.

Before you ask… I got a trial membership offer on Instant Checkmate. I’m not going to cut off my nose to spite my face…

I did a thorough background check on Kris. It looks like he had some serious tax problems, spanning from 2013 through 2015, requiring him to appear in court a few times. He also has a bankruptcy on his record, but that was filed back in 2004. Technically, that’s fallen off by now. While he doesn’t have an arrest record; according to Instant Checkmate, he apparently has family members who have an interesting background. 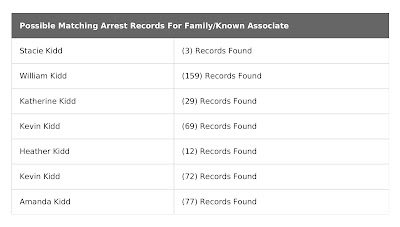 He has a history of broken commitments, as shown with his business dealings with actor David Prowse. Mr. Prowse was the headliner scheduled to appear at Texas Comicon in 2015, but had to cancel at the last minute due to actions on Kris’ part (or; rather, inaction, resulting in breach of contract).

Quote from English actor, David Prowse (the original Darth Vader), regarding why he cancelled his appearance at the 2015 Texas Comicon:

“Regrettably I have had to cancel my appearance at this weekend's Texas Comicon in San Antonio. I feel it is important that the fans know exactly why I have had to take this action.

This booking has been in place and contracted for many months, but only recently has the promoter started to organize my flights and travel. I gave specific instructions as to how I need to be accommodated on a long flight. I always travel in Business Class as I need plenty of room due to the fact I am very immobile and use 2 crutches. Even short flights I find very uncomfortable. I had also requested that any layover be long enough for me to easily make any connections. I was sent a flight proposal that was exactly what I had requested. We were told that this would be booked, yet some time later the promoter chose to book with a different airline involving a very tight connection in Detroit. This was done without any consultation. With this ticket I had been booked in a lower class than that in my contract. My assistant repeatedly emailed the promoter over several days asking for changes to be made to the ticket. We were all assured that the ticket class would be upgraded and the connection changed for an earlier flight. A warning had been given that we were running out of time to get everything organised. On Friday we were informed that everything would be adjusted and confirmed by the end of Saturday. By Monday morning this still hadn't been actioned by the promoter. With only 3 days until my trip I was very concerned and worried as it appeared that the promoter had left everything to the last minute. I therefore instructed my assistant to cancel me out of Texas Comicon.

This is also the same reason why Paul Blake has cancelled.”

Vendors and Guests are not the only people who have seen this side of Kris Kidd. The patrons who have paid $30 for a single day ticket to get into Texas Comicon are also very dissatisfied. One person has reported him to Ripoff Report:

“My son and I traveled all the way from California to San Antonio to see Darth Vader at the Texas Comicon hosted event. Only to find out when we got there neither he, or several other of the promised celebrities were there. Feeling totally scammed by Kris Kidd, who put on the event, we checked him out on the internet when we got home. We found out he has been sued many times by other people and companies he ripped off for more than $ 100,000.00. This includes arena's he's rented as well as hotels etc. It appears this guy used to be a SeaWorld announcer now is a morning DJ in San Antonio. All beware of anything he says or events he puts on-like the Comicon events, Texas Coin show and Texas Toy Shows. Check for yourself on the internet. The law suits he has been served with show he is a liar and a thief.”

In our search, we could not find information on other lawsuits. However, we did find multiple complaints from his customers, just on the reviews on the Texas Comicon Facebook Page: 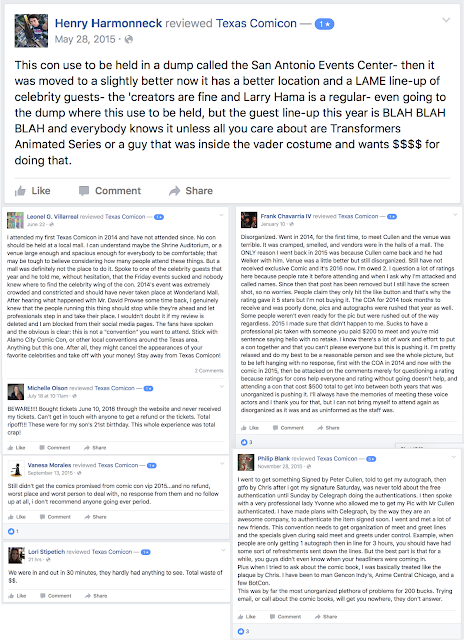 What really gets me is that one review at the top, from 2015. He moved it back to the San Antonio Event Center this year! HA!!!!